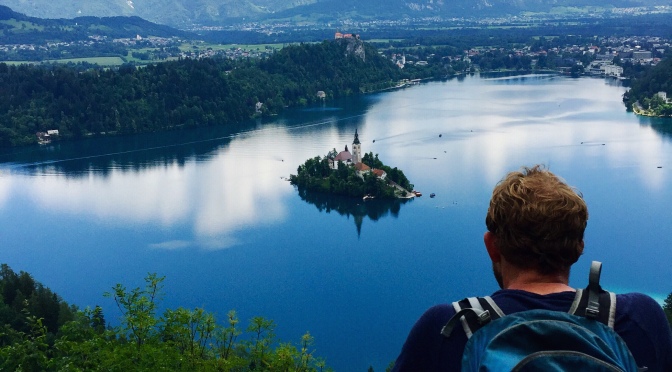 When we first discussed going travelling for a year I already knew that two of the key countries I wanted to visit were Slovenia and Croatia. Whilst Eamo has visited both on past adventures, they were both new countries for me. After spending three amazing weeks in Croatia and it absolutely living up to expectations, I was super eager to see what Slovenia was about to lay down for us.

Our first stop was the country’s (wonderfully difficult to pronounce) Ljubljana, a perfectly pocket-sized city. Where it lacks major attractions, it makes up for it by being incredibly charming and authentic. Practically car free, the city centre has been opened up to pedestrians and cyclists alike. With quaint historic cobbled streets, old colourful buildings and bustling riversides, Ljubljana is like the town that time forgot. 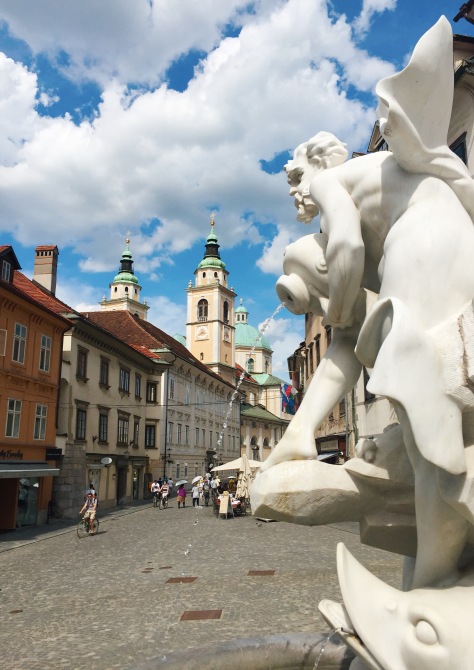 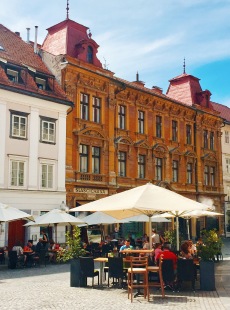 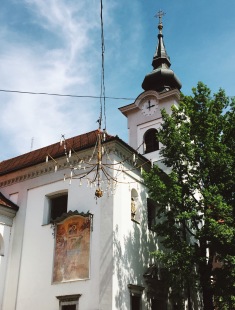 After spending a couple of hours or so wandering through the city’s old town streets and along the river, we ventured up to the castle. We didn’t actually go in the castle (it’s of no historic value as it’s actually a replica) but you don’t need too to enjoy the beautiful gardens and vineyards in the grounds. The views over the city are also quite beautiful (epic fail on the photo here, sorry!).

Our final stop in Ljubljana was Dragon Bridge but not before we stopped by Prešeren Square and the Triple Bridge, one of the city’s most significant landmarks. 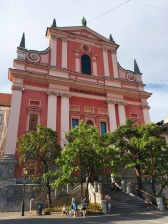 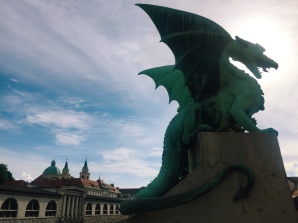 The vans resting place for the night was in a private restaurant car park in Pri Kovacu. A great little spot, it was perfectly quiet with pot belly pigs and goats as neighbours and if you ate in the restaurant you could spend the night for free.

Although it was a fleeting visit, you don’t really need more than a day in Ljubljana so it was onwards and upwards to our next stop in Slovenia…

Have you ever been to a place where it looks exactly like all the photos on Instagram, you know, the ones we all sit drooling over and dream of visiting? Well, that’s Lake Bled.  After a recent brief trip home, several family members pointed out that I am extremely fickle with ‘my favourite place’.  Rightly so, I really have been – so I’m not going to say this about Lake Bled, but what I am going to say is that it’s by far the most stunning place I’ve been too in Europe.

After only five minutes of driving in to Bled and round the lake towards our campsite, this was our first glimpse of the lake and we knew we wouldn’t be leaving here in a hurry… 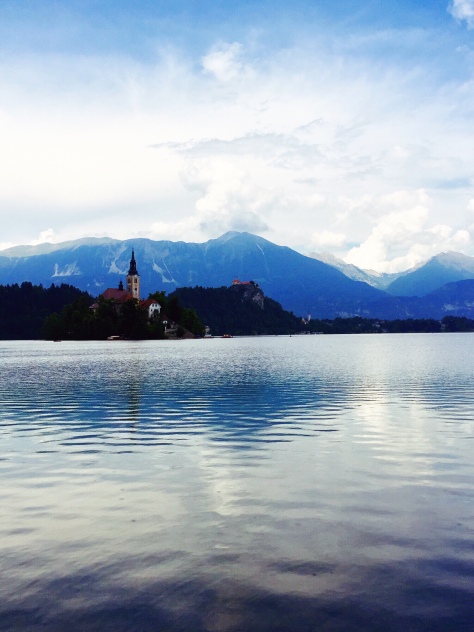 It was about 26 degrees as we arrived and the humidity was somewhere around one million percent and we were as desperate as each other to launch ourselves face first in to the lake. So, we did just that. 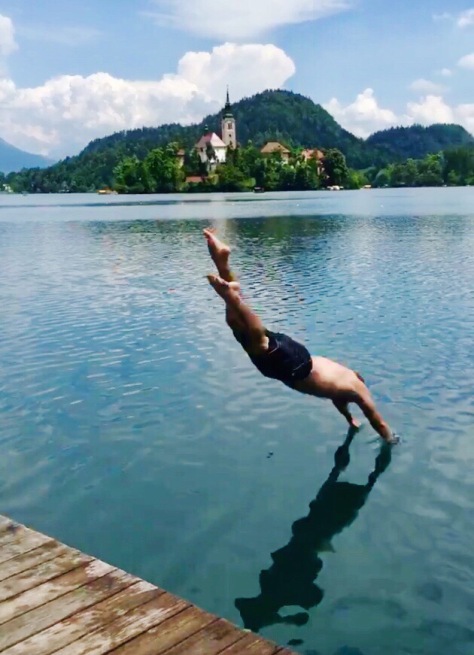 The lake’s water is so enticingly clear and clean that in places it looks like glass, and on a hot summer’s day it’s by far the best thing to do at the Lake.  In comparison to most lakes, I guess it’s quite petit. At about 2.5km long by 1.6km wide, you can easily swim the width or length; just make sure you don’t get in the way of the boats making their way to the island or the rowing club. 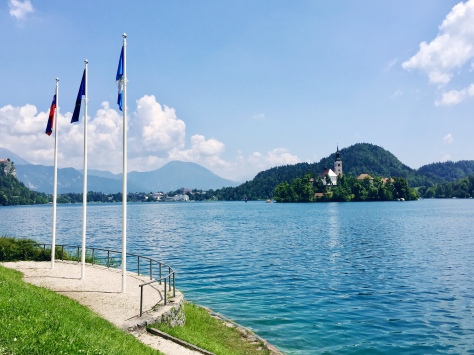 The island in the middle of the lake is easily the main focal point. It’s super easy to get there whether you fancy rowing yourself in a little wooden boat, or hopping in one of the Pletna boats, paddle boarding, canoeing or swimming – which ever takes your fancy. We rented a little wooden boat which cost us €15 euro for an hour (tip – head to the west side of the lake for boat rentals, they’re cheaper than anywhere else) and headed out to the island for a gander. 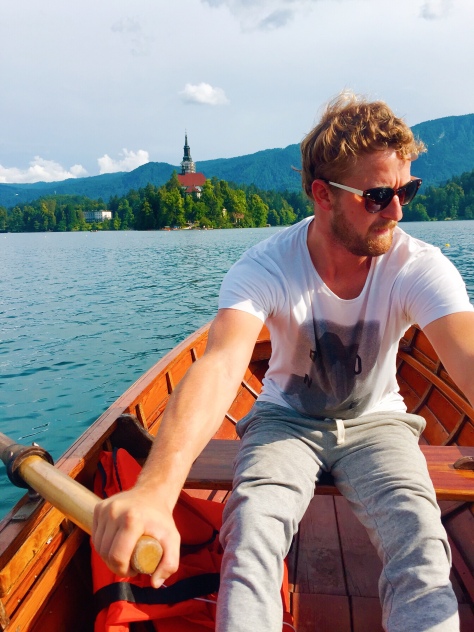 A dainty island, it mostly consists of a church, a souvenir shop and a cafe but it’s worth a walk around even to just catch a glimpse of the enormous catfish that reside at the islands edges. 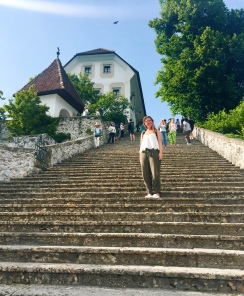 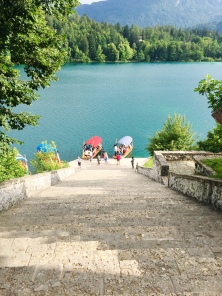 I attempted to row back to the main land which was an epic fail much to Eamo’s amusement but sweet karma soon took revenge as Eamo was laughing his head off a little too much and dropped his sunglasses overboard, never to be seen again! 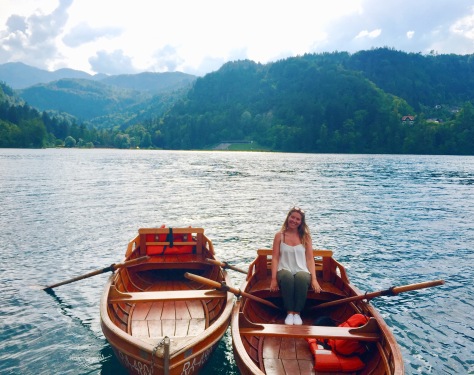 One of the best parts of travelling to new places is indulging in all the local delicacies. Lake Bled has the Bled Cake and oh my, you have to try this on your visit. In a nutshell, it’s cream three ways with puff pastry. I know, right! 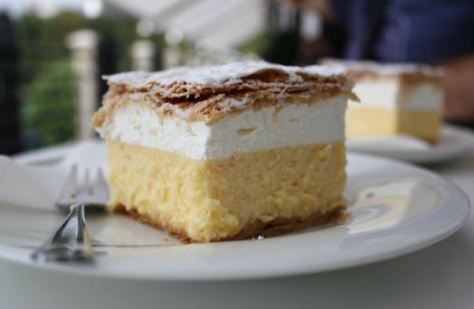 If you think Lake Bled looks incredible from the ground then wait till you see it from the top of the Mala Osojnica Bled view-point, it is something else! Now don’t be fooled, it is not an easy climb. Whilst is might not take long at about 25 minutes, the hillside up is relentlessly steep. We passed a few couples that didn’t make it and made their way back down instead.

Tired, breathless and resembling a beetroot colour, I let out a tiny squeal as we came in to the clearing to this view… 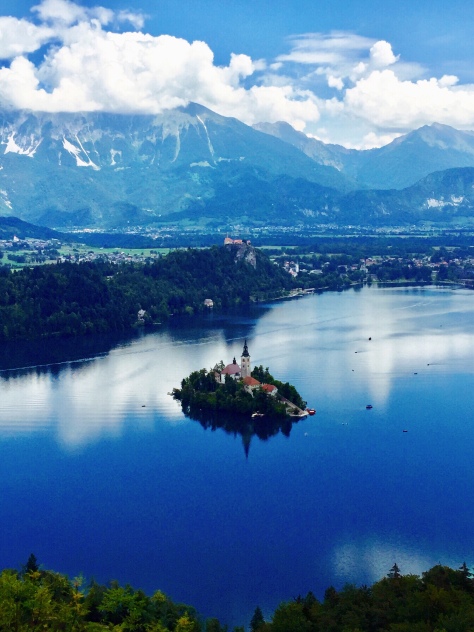 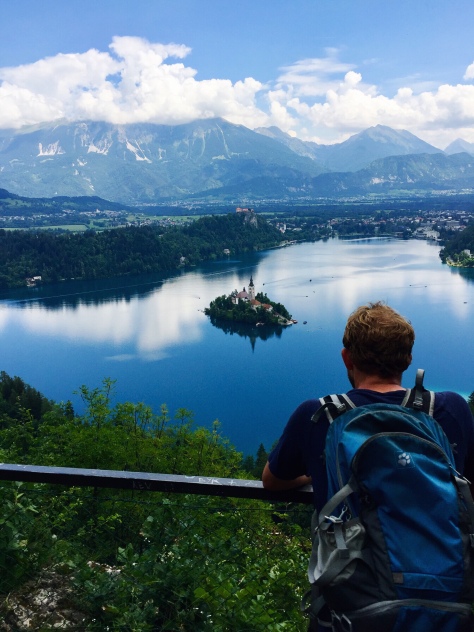 As Eamo always says, everywhere should have a hill and this is why! 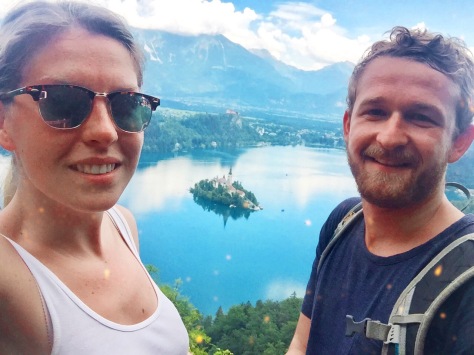 Another great way to see Lake Bled from high up is the Straža Bled (the summer toboggan). For both kids and adults, it’s a really fun way to see the lake and a perfect activity to kill some time. For €6 you get the chair lift up to the top and then toboggan down. Eamo moaned at me after though because apparently I was going too slowly! 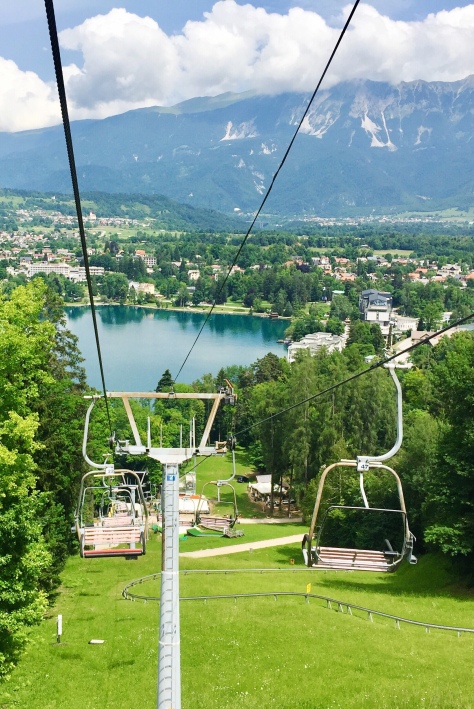 I adored Lake Bled – waking up to such a place every morning was like waking up in a far away Disney land but after six days of exploring, climbing, eating Bled cake and just generally being in awe of the best place in Slovenia, it was time to cross boarders again to our next destination… Budapest. 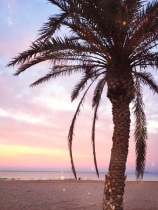 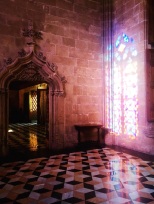 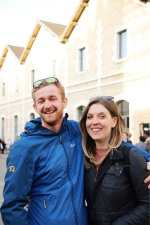