Do you know how big Venice actually is? No, neither did I. Well, let me tell you… The city is made up of over 400 bridges, 120 islands and a maze of narrow, winding streets, so don’t expect to see it all in one weekend. We had just 72 hours to see as much as we could of Italy’s most romantic city so we hit the ground running, big time.

It had been a long time since I was last in Venice, at least fifteen years and my experience of the place was much different. I was here with my parents before, I couldn’t legally drink and I didn’t have the same appreciation for the likes of culture, history, architecture and food as I do now so I was excited to be back here to discover it all over again with Eamo and two of our good friends, Emily and James.

One thing I do clearly remember from my trip to Venice many moons ago was that it was hot and seriously smelly and I was pleased this time around that we’d chosen to visit in early April when the weather was cooler and there was no smell. There were also less people which meant less queues everywhere and although the city was most definitely still busy, it wasn’t over-bearing like it can be in the summer season, which was a god send considering we were all feeling rather ropey on our first day of exploring (we may have overdone it slightly the night before!).

Our first stop, of course, was for pizza. For two euro you’ll get a slice of pizza the size of your head, perfect for a hangover and to set you up until lunch.

My biggest memory of Venice from my previous visit was the pigeons in St Mark’s Square and the insane number of them that there were.  I am not a pigeon fan, especially when people think it’s hilarious to chase them and feed them in crowded areas like St Mark’s Square. I was delighted to find that there was a distinct lack of pigeons terrorising the square these days, although there were still plenty of lunatics feeding them… 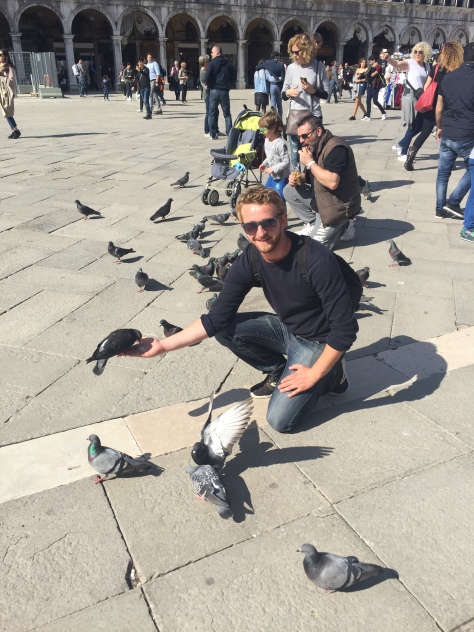 The Basilica is worth a visit if only for the glittering 8000 square feet of luminous mosaics that line the inside. Just make sure you don’t get in the wrong queue once inside which are for the various exhibitions. We queued for forty minutes and paid two euro each to see a big gold slab covered in jewels (about as exciting as it sounds) when we thought were in the queue for something else entirely! 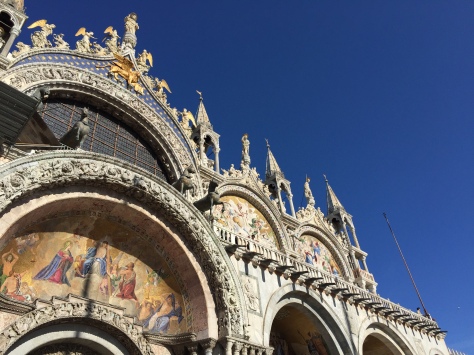 …and be sure to see it by night too.

If you’re going to see any bridge in Venice it should be the Ponte di Rialto. It’s easily the most attractive bridge in the city and is pretty much at the heart of it all. 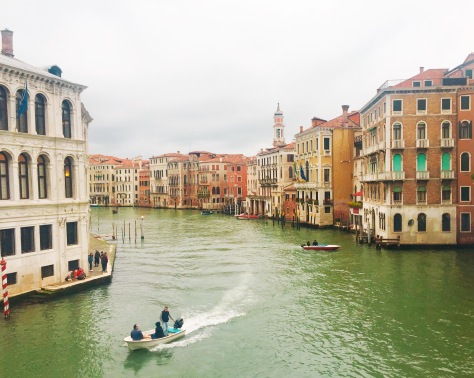 There were way too many people on it when we arrived, all trying to get that perfect shot down the Grand Canal – I’d definitely suggest going either early or later on in the day to avoid the crowds as much as possible.

By this time we were ready for some well deserved food and a Spritz, or a Bellini, or both.  After we made our way firmly away from the square, we stumbled across Taverna San Lio, a quaint little restaurant that serves locally sourced Venetian cuisine and oh my, it was seriously good and well priced. The Bellini’s were also to die for and the waiter was rather easy on the eye, bonus!

Our second day in the city was just as busy as the day before. A lot less hung-over this time, our day began at the Doges Palace…

Doges Palace & the Bridge of Sighs

As one of the most important… if not the most important building in Venice, the very impressive Doges Palace oozes opulence and wealth from the old days. It’s by far the finest building in the city and is absolutely worth a mosey round. Once a fortress surrounded by canals, it was rebuilt to be the home of the Venetian Government as well as the first and grandest building people saw as they arrived by boat.

From the Palace you cross the Ponte dei Sospiri (Bridge of Sighs) another one of Venice’s most famous bridges.  Its infamous name from a legend that says prisoners who crossed the bridge on the way to their prison cells or execution chamber would sigh as they caught their last glimpse of the city through the tiny windows.

For those not being sent to jail or executed, a much happier legend says that if a couple in a gondola kisses as they pass under the bridge, their love will last forever…

The obvious thing to do when in Venice is to take a romantic gondola ride along the canals, so we did just that. After some well played haggling, we managed to get another fifteen minutes added on to our ride for a small extra cost. Even though the prices of gondola rides are fixed throughout the city, you’ll still be haggled for all the little extras like if you’d like champagne or to be serenaded.

Some people think that thanks to the mass tourism, Venice has become nothing more than a glorified museum, but despite all the crowds and tat shops, Venice is still very much a living, breathing city. Within this maze of narrow bridges, poky courtyards, winding canals and laundry-lined streets, you can glimpse a picture of the real Venice if you look hard enough.

We wanted to get away from ‘touristy’ Venice for a few hours so we headed to where all the locals go for dinner and drinks – Rio di San Girolamo. It’s about a 500m stretch of bars, restaurants and cafes right on the canal and is perfect for a cheeky sun-downer. If the weather’s good, be sure to sit on the bridges or side of the canal with you feet hanging over… you get discounted drinks if you don’t use the chairs and tables!

For our final day, we decided to venture out to one of the outlying islands that is Murano. Famous for its gloriously colourful glass, Murano is a unique and very charming place. After hopping on the Vaporetto from the main land, we had the day to explore Murano to our hearts content. 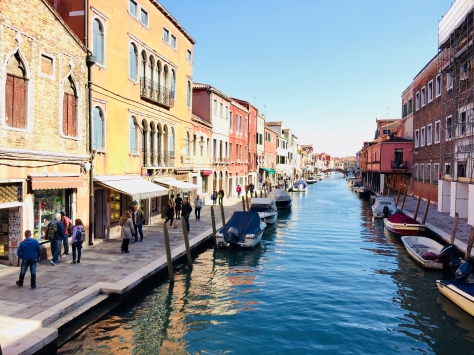 One of the best things to do in Murano is to just wander around and soak in all the pretty sights and take reems of photos, because this little island is truly photogenic. We walked along canal after canal and popped in to loads of shops on the way around to gaze longingly at all the expensive, perfectly blown glass for sale.

The skill and imagination needed to craft these amazing pieces of work is serious, so we decided to check out a glass blowing demonstration at one of the local factories. For €10 we got to watch a master glass blower at work where he effortlessly made a couple of pieces including a horse and a vase.

It was so incredibly fascinating watching him work, turning a red hot blob of molten glass into something so delicate and beautiful with such ease and speed.

After the demonstration, we were brought through to the showroom where we got to gaze upon some of the most expensive and weirdly wonderful pieces that were for sale. One in particular was a perfect replica of a large cured meat joint (like you see in shops all over Italy) and when I asked the owner about it, he said it was only made because they had a bet with the master glass blower that he couldn’t do it. The master proved them hugely wrong. Although it was a very random piece, it was flawlessly crafted and was on sale for a mere €10,000!

We then came across the gift shop where we could put our €10 entry voucher towards something if we liked. There was no pressure at all from any of the staff and we came away with a beautiful black vase and several other items.

As our day in Murano came to an end, as did our time in Venice. It had been such a good weekend re-visiting this romantic city, seeing good friends and even the weather came through for us and started what would be an amazing spell of sunshine. We will definitely be back to this enchanting place as there’s still 118 islands left to explore!

Camping Venezia was our home for the few days we were in Venice and it was completely ideal. Just on the border of the main land, you can jump on a bus from right outside the site which takes you into Venice in under seven minutes. The campsite itself has a great indoor pool (although it is €2.50 extra) and the showers and toilets are top notch (the best we had seen on our trip so far). The only niggle is that the campsite shop is poor and will cost you about €15 for a bottle of wine – they also didn’t have any bread when we were there. However, there is a Lidl 900m up the road which we happily wandered to instead.