I found writing about Bordeaux hard. We had such an exceptionally good 72 hours in Bordeaux that I was worried I wasn’t going to capture everything or do the whole trip justice.

This weekend wasn’t originally quite the trip it turned out to be.  I had mentioned to one of my best friends that we would be in and around Bordeaux towards the end of November, which, coincidentally was the same time she was visiting her boyfriend.  Of course, we started to make plans.  Then our other best friend got involved and quickly booked flights for her and her boyfriend as well.  A quick catch-up in the city quickly escalated in to a full blown couples mini-break which would likely mean over eating, over drinking and over spending for 3 days straight. I wasn’t wrong.

We left the itinerary up to my best friends boyfriend (who happens to be living in Bordeaux for a few months and also has family here), as he had the most knowledge and inside scoop on the best places to visit and things to do.  He did good – unexpectedly good actually, if I’m honest.

When it comes to overnight parking for motorhomes, Bordeaux is a bit of a dead spot. There’s one Aire in the city center which charges €25 a night with no services (we avoided completely) or there’s Camping Le Village du Lac, which is where we stayed.  It’s about 6km outside of the city but has a bus stop right outside that takes you to the tram station, where you can jump on a tram every 15 minutes in to the city centre – all for €1.50 each way.

Camping Le Village du Lac was on the higher end of the ACSI campsite prices at €17 per night but it’s the best place we have stopped so far for sure.  We parked up right next to one of the small (very picturesque) lakes which over-looked the main part of the site which consists of two lakes, a water fountain and a whole heap of ducks.  The showers were hot, the toilets were clean and the shop and restaurant were open and stocked.

We made our way in to the city centre that evening to meet two of our friends for dinner. The restaurant was chosen by my friends boyfriend (on the recommendation of one his friends) and a bloody good recommendation it was.  Restaurant LouLou, quietly tucked away on Rue de la Cour de Aides is quintessentially French.  You somehow feel like you’re at home here (even on your first visit), and to say the food is outstanding is an understatement.  I can’t even remember what we had but, my god, it was good! So far, so Bordeaux.

It’s not cheap, but if you want a real French dining experience with seriously delicious food, then go here.  It’s easy to understand why it’s hard to get in, you almost certainly need to book in advance, you’ll be lucky to get a table just by walking in.

With two friends landing in Bordeaux at the crack of dawn the following morning, our first stop was for a private tour around a local vineyard – Château Angludet.
A family run business, Château Angludet belongs to the Sichel family in Bordeaux and has done for six generations.  Situated in the Médoc on gravel deposits from the Garonne, the estate covers a total of 81 hectares and produces wines under the Margaux appellation.

Now, if like me, you’re no wine connoisseur, then the above might not make much sense but don’t worry, it doesn’t really need to.  All you need to know is that Château Angludet is simply divine and absolutely worth a visit.

We arrived mid-morning and were greeted with a brew by Daisy who would be showing us around.  Once everyone had arrived, we got aboard Bernadette the buggy and Daisy took us for a drive through some of the most remote and secret corners of the property. The vineyards go on for days and the estate itself is gorgeous.  Back at the main house, Daisy took us for tour around the vat cellar and walked us through the process of wine-making (it’s actually quite fascinating).  For me, personally, the best building at Château Angludet is the barrel cellar – the divine smell of aging wine mixed with the oak barrels that fills your head as soon as you enter is amazing. 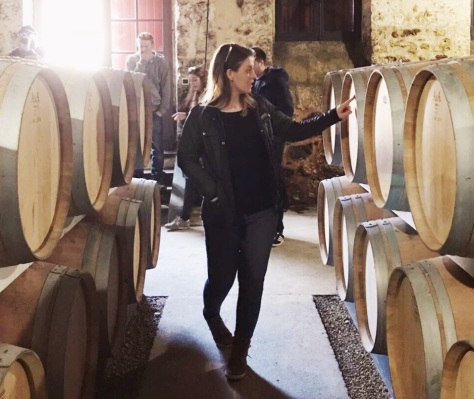 The final and most exciting part of the tour of Château Angludet however, was, of course, the wine tasting.  Back in the tasting room, Daisy let us sample a few of their vintage wines; it’s 12’o clock somewhere, right? 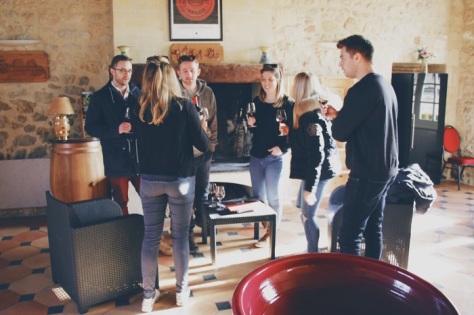 Château Angludet is a fine, elegant wine which simply slips down your throat like silk. It’s by far the best wine I have ever tasted and probably will remain so for a long time to come.  If you’re ever in Bordeaux and are looking for a morning or afternoon away from the city, then definitely book a visit here – you won’t be disappointed.

That afternoon we made our way to La Cité du Vin – a unique cultural center dedicated to the living heritage of wine.  At €19 entry, we decided to check out the indoor food market next door instead, which of course ended in a cheeky bottle of wine being sunk.

Dinner that evening was at Mama Shelter – a lively and very popular restaurant in the city centre that has given the old utilitarian building it occupies a fun, edgy makeover. The ceiling is completely graffitied, there’s a kaleidoscope mix of kids inflatable swimming rings above the bar, and there’s a weird collection of room décor from the wall of musical instruments, to the cabinet of debaucherous sex toys.  Mama’s is cheap, fun and seriously tasty.  So much so, it seemed like we ordered ALL the food and cocktails they had to offer.

For brunch the next day, we found ourselves at the Marche des Capucins.  You could eat breakfast, lunch and dinner here and then some.  We wandered around for a good while, taking it all in at Bordeaux’s largest food market, whilst pretty much salivating, as we ummed and aahed about which stand to eat at.  All the food looked and smelt so good, but we finally settled on one that was also selling wine, of course.  The food was damn good and if we didn’t already have our next meal planned (and more importantly more sightseeing to do) we all could easily have stayed at the Marche des Capucins all day, moving from stand to stand, grazing away.

The best way to explore Bordeaux (or any city) is by bike.  So, that’s what we did.  We hoped on some rentals and ventured off to the suburbs to the transformed old military barracks, on the right bank of the river, that is now an ecologically minded co-operative called Project Darwin.  The aim of Darwin is very simple; the reduction of environmental footprints, creating new economic synergies and promoting urban cultures, and that’s exactly what the 100 companies and 30 associations that share this alternative space are about.  The recently regenerated site includes a BMX track, bike polo field, a grocery-cum-restaurant, an urban farm and an artists’ residence.

There is something for everyone at Project Darwin which was nicely reflected by the total mix of people there when we arrived. 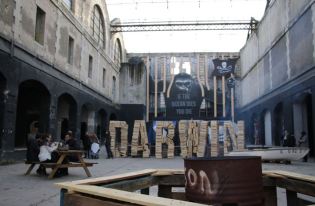 Our Bordeaux mini-break was almost over.  Flights home were looming and Monday morning was calling.  Before we said our goodbyes though, we snuck in one last meal (and one last bottle of wine) together at the delightfully cute L’autre petit bois in the city center.  The décor is super quaint with the walls full of pictures in all different sizes, big fake trees and flowers casually placed throughout the rooms which is all complimented by the dim lighting throughout.  There isn’t a huge choice of dishes on the menu, but that was ok – what they did have on there was exactly what we were after, and all main dishes are €9.95.  We were pleasantly surprised when the food arrived and the portions were huge all round and absolutely delicious.

That was the end of our mini-break weekend and what a weekend it was!  Full, half-cut and spent out, we said au revoir to each other and went our separate ways (until the next one, of course).

I could of stayed so much longer in Bordeaux, and for me, that’s where the lack of motorhome parking in and around the city let us down.  Although our budget had gone completely out the window over the course of the weekend (it was truly worth it) we couldn’t afford to stay at Camping Le Village du Lac any longer.

72 hours isn’t enough time to see Bordeaux in all it’s finery so we will definitely be back in the future to indulge in everything this city has to offer soon.. 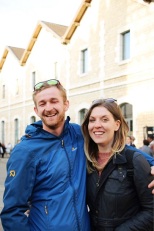